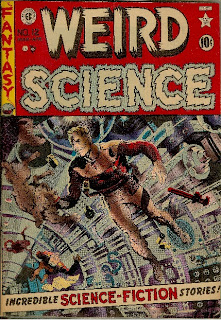 "A Gobl is a Knog's Best Friend" - A rocket ship crew heads through space, and the commander gets frustrated with the annoying pet dog that one of his crew members has brought along. Eventually the rocket ship comes across an alien planet and upon landing a bizarre looking humanoid alien drives up in a vehicle. The alien invites them to come along and the men are brought to the alien's city. There they see many other aliens, which can communicate with each other, but not the humans. Later, other creatures that look just like humans come in, and the crew is brought to an area where they are held against their will. They eventually learn the language of these new creatures, who call themselves Gobls. The Gobls claim that the other aliens, the Kongs, keep them as pets. The rocket ship crew is kept on the planet as pets and the Knogs send some Gobls to Earth, thinking it was a friendly exchange of pets. One of the most bizarre EC story names ever, with a rather obvious premise and ending.

"The Last Man!" - A man heads into the atmosphere using a pod attached to a giant balloon, hoping to beat the record of the man who has attained the highest altitude. He is eventually able to rise high enough up to break the record, but while he is up there, nuclear war occurs on Earth and the entire surface of the Earth is destroyed. Eventually the man heads back down to the planet and gets out of the pod. He heads throughout the destroyed landscape searching for any other human being. He eventually comes across a beautiful young woman and thinks they can be the new Adam and Eve, only to discover that she is his sister.

"The Android!" - A man named Ron takes on a new secretary, the beautiful Ellen. He immediately falls in love with Ellen and desires to have an affair with her to get away from his wife Lee. Ellen isn't very accepting of his advances though. One night Ron runs into his friend Cal, who tells him he has been working for the government on creating androids. Ron decides to have Cal create him an Android that looks just like him which he can use to replace himself, that way he can run off with Ellen. The android is created and Ron gives it all of his personal information so it can take his place. When he goes to see Ellen however she reveals that she is an android herself and is only on a trial run, to be soon returned to the factory. When Ron returns home he finds that the android has contacted Cal, convincing him that Ron is the android and must be returned. The android is successful in fooling Cal, who kills Ron. The main character of this story is a bit too overzealous, considering Ellen never shows as much interest in him as he does in her, for obvious reasons.

"Chewed Out!" - A young man named Harold living in Arkansas is able to unintentionally contact an alien civilization that is traveling to Earth on a rocket ship after he buys a ham radio. Harold informs the authorities and the military arrives to manage the situation. Due to the publicity a large crowd gathers around Harold's house as he contacts with the aliens, who are soon to arrive on Earth. The military leader, a pushy General gets frustrated during the event and when it is time for the alien ship to land, it doesn't appear anywhere. The aliens tell Harold that they have landed in a strange lake. The General believes things to be a hoax and has Harold arrested in the radio destroyed. He buys a hot dog with mustard and sauerkraut from one of the local vendors. Biting into something hard in the hot dog, he pulls it out of his mouth and finds the alien's very tiny, destroyed ship. This story's spring board was "Pictures Don't Lie" by Katherine MacLean. The southern locale and bullying army general were inspired by Feldstein's own experiences when he was stationed in the Air Force in Arkansas during World War II. Both Feldstein have a brief cameo in the story.
Posted by Quiddity99 at 1:03 AM