Tales from the Crypt #24 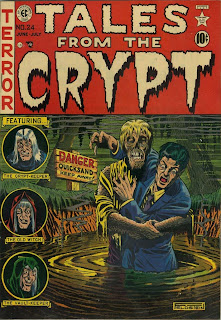 One of Tales from the Crypt's most well known covers starts off this issue.

"Bats in My Belfry!" - A stage actor named Harry goes deaf. This results in the end of his acting career and a lot of financial stress for he and his wife, Joan. Harry goes to see a blind friend, John, who reveals that he went to a man who was able to give him cat eyes that permit him to see. Harry heads to see the man, who provides him with the hearing organ of a bat. Upon returning home, with hearing abilities greatly in excess of that of a normal person, Harry is able to hear Joan talking to her lover on the phone. He later notices strange things happening to him. He wakes up in the closet, hanging upside down, notices hair growing on his face and a membrane growing beneath his arms. He returns to see his friend John, who he finds turning into a panther. Harry realizes he is turning into a bat. His wife and her lover plot to kill Harry for his life insurance, but he manages to overtake the lover in an alley. Now fully transformed into a vampire bat, he drinks the lover's blood, then returns home and does the same to his wife.  This story was the inspiration for the Tales from the Crypt TV episode "Ear Today, Gone Tomorrow". The episode had nothing to do with that original story, making me wonder why they didn't name it after this story. It was in the final season of the show, and was still a rather poor episode though.

"The Living Death!" - Two medical students, Lester and Arnold are close friends, even going after the same woman, Laurie. The two head into seperate fields, with Lester focusing on curing illness through psychological means, while Arnold focuses on surgery. Lester is set to marry Laurie, but when she develops a tumor the two conflict over whether to operate on her through psychosomatic means or surgery. Arnold wins out, but she dies during the procedure. Years go by. Arnold develops a brain tumor, and with no one who can operate on him, he goes to see Lester. Lester desires to prove to Arnold that he could have saved Laurie many years before and puts Arnold into a hypnotic trance so he cannot die. Upon leaving however, Arnold is it by a car and is killed. His body doesn't die however, nor even start decomposing. People don't believe Lester at first, but do as time goes by and nothing happens to Arnold. Months pass. Arnold calls out for Lester to help him with the pain. Lester mistakenly says "Laurie", the word he has chosen to break Arnold out of the trance. This causes Arnold to die for real, and he immediately decomposes. This story was inspired by the Edgar Allen Poe story "The Facts in the Case of M. Valdemar".

"Midnight Snack!" - A man reads horror stories late at night. Suddenly his feels dizzy and finds himself out in the middle of town. Hungry, he stops by a restaurant but the scent of cooking meat repulses him. He leaves the restaurant and has another dizzy sensation, waking up in a graveyard. Having a shovel with him, he digs up the body of a recently buried corpse. After another dizzy spell he awakens finding the body partially devoured. He grabs the corpse and starts running, being chased by an agngry mob. He trips and falls, but then awakens at his home, believing it all to be a dream. When he opens his refridgerator however, he finds a partially devoured corpse inside. He realizes that it wasn't a dream, and he's a ghoul. Bit of a drawn out story with an obvious conclusion; this is the weakest story of the issue.

"Scared to Death!" - A man named Ralph is brought to a party held in the honor of a young woman named Cora, whose uncle Alex is quite wealthy. With Cora being the heir to her uncle's fortune, Ralph decides to start a romance with her, and eventually marries her. Not liking the way Alex is treating him, Ralph is able to convince Cora to let him kill her, and he strikes him one night while he is out on a stroll, killing him. Alex's death has a grave effect on Cora, who suffers a heart attack and becomes bound to a wheel chair. Ralph decides to kill her as well, figuring he can do it by inducing another heart attack. He tries to convince Cora that her uncle Alex is back from the grave and wants revenge. He is successful and she has a heart attack and dies. Moments later however, Alex's corpse arrives for real. He grabs ahold of Alex and carries him into the middle of a pond where the mud, acting like quicksand, quickly consumes them. Some only so-so artwork from Wood here, but overall a fairly good rotting corpse story.
Posted by Quiddity99 at 2:28 PM